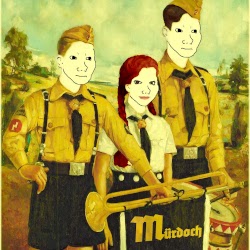 Murdoch Murdoch is an alt-right(*) cartoon series begun in 2015, made with the irreverence, edge and pervasive humor of 4chan's Politically Incorrect board, /pol/. The anonymous Murdochs (Murdoch Murdoch and his two friends, Murdoch Chan and Dr Murdoch), earn especial love for fearlessly taking on tough alt-right issues, and for giving them the impact they deserve, helped greatly by their collective skill in choosing music.

If you're looking for a place to start, perhaps try the Essential Episodes.

"Once you take the red pill there's no going back." - The Real Red Pill Blues

Typical testimony to their impact:

Q: Is MM safe for kids?
A: Not for homeschooled, Christian seven year olds, but public school high schoolers, maybe middle, might enjoy it. A Parent's Guide.